Found On The Beach

Early in my career I worked at a large regional bank. One day a bank client stuck his head in my office and said he had a complaint: “I tried to exchange some money and the teller said she couldn’t do it”. Hmm, that didn’t sound right, I thought to myself. I knew we routinely changed money, so I asked, “What kind of currency were you trying to change?”

“German,” was the reply.

This was pre-Euro days, and I knew the bank regularly took in Deutschmarks. My next question was, “How much were you trying to exchange?”

“Where did you get 320,000 in Deutschmarks?” I asked, fully expecting something like, “It was in my grandmother’s safe deposit box,” or the like. Instead, he responded, “My wife and I found it while walking on a remote stretch of beach in the Bahamas”.

Keep in mind, this was the mid 80’s and 320,000 would buy you a very nice waterfront home. It was also not long after the movie Scarface came out. Instantly I had mental pictures of Al Pacino walking into my office with Uzi’s blazing yelling “That’s my money”. (Holy cow, what to do, I thought. Keep cool. Think this through.)

It’s amazing how quickly your mind works when you think a drug-lord is going to bang on your door.

“320,000 is a lot of money. Was it in a suitcase? How did you get it back into the US?” were the first questions that came to me. The client (a postman by trade) responded, “We found an envelope, picked it up, looked inside and saw that it was full of money. We are thinking of using it to get our dream home.”

“That must have been a huge envelope. Didn’t they stop you at customs?” I asked.

“No, normal size envelope and they didn’t say anything at customs”.

“Didn’t you declare that you were bringing in foreign currency? You do know that you have to declare anything over $10,000?” I stated.

A blank stare was what I got for an answer, followed by, “What should I do?”

During the pause in the conversation my mind had a chance to go back into its archive and rummage through a European history class I took my sophomore year. “What are the denominations of the bills you found?” was my next question.

“What are the dates of the bills?” 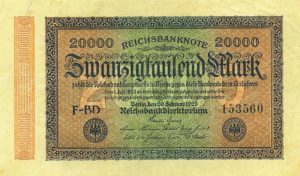 I was no longer fearing for my life, but now deliberating how to deliver the news. “Have you heard of paper gains and paper losses?” Again, I got a blank stare. I explained that a paper gain is where you own something, its value increases, but since you have not sold the item, (home, stock, painting…) its increase in value is only on paper. When you actually sell the item and get cash, then it goes from a paper gain to a “realized” gain.

The client said, “I have cash, so it is realized”. I answered this by noting that if he was in Germany in the 1920’s, then yes, he would be correct. “Since that is not the case, you now need to convert the old German money to new US dollars. The conversion would be how you realize your gain.”

“Not so fast”, I responded. “I haven’t told you about paper losses. A paper loss is just the opposite of a paper gain. Instead of the item going up in value, it goes down. You realize the loss when you sell the item and get cash.”

My client realized I was trying to make a point, but could not see the train light coming down the tunnel tracks. I went on. “In your case, you had a paper gain when you found the envelope full of money. You have a paper loss when I tell you that you found bank notes from the Weimar Republic.”

Next, I proceeded to regurgitate one of the few things I remembered from my history class. Germany after World War One was straddled with astronomical debt from the war and the Treaty of Versailles. To pay this debt they started printing huge sums of money. They printed so much money that it would take a wheelbarrow full just to buy a loaf of bread. I then said, “You had a paper gain before your came into my office. Now, with more information, you have a paper loss, a good story and a neat souvenir”.