I recently read a book by Angela Duckworth called “Grit”.  Basically, it says that success is substantially influenced by perseverance, “keeping at it” or “sticking to it”. Intuitively that makes sense.

However, Ms. Duckworth conducted a study to verify the concept.  Her study boils down to: You can have all the brains in the world but if you don’t apply them you won’t accomplish anything. Her study showed that people who had an objective and stuck to it were more likely to succeed than someone with a wall full of diplomas that jumped from project to project. 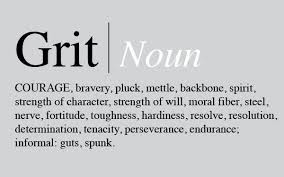 When I thought about the concept of “Grit” I could easily think of a number of cases where perseverance was the determining factor in my success. As an undergraduate I had to take the standard business courses which included accounting. Let me say that I loved my finance courses but accounting bored me to sleep. When I say “to sleep”, I literally mean snoring on my deck in the middle of class asleep. Yup, it was so difficult for me to stay awake through an accounting class that I dropped it three times.  With grit and a lot of coffee I eventually stayed awake long enough to get through it.

When I decided to start my own business I kicked around several ideas. The first, “Close it Internationally” was quickly shot down by some market research which told me that businessmen did not want to get in a small plane and fly seven miles offshore just to save a few thousand dollars on stamp taxes. The second, IBTC (investment management for Pacific Island countries) got off the ground but didn’t have the wings to fly. At this point I desperately needed to make some money just to pay basic bills. So, I signed up with Merrill Lynch and instantly realized there was a cultural mismatch. Think creators of the financial crises versus financial Peace Corp. Working a second job (one that I hated) just so I could get mine up and rolling was another example of “Grit” (i.e. making the short term sacrifices to achieve the long term goal).

As I read the book I thought about how grit/perseverance translated to the investment world.  Instantly I thought of the recent financial crisis. The people that got out of the market shortly after the crisis typically did worse than people who stayed in (i.e. people that got out missed part of the recovery). It took Grit to stay in when the market looked so bleak. Then I thought about the perseverance it takes to regularly set money aside and Grit not to touch it until retirement. These are the people that end up with a financially comfortable retirement versus the people watching Cramer for hot stock tips.

So, I agree with Angela and suggest that you add a little Grit and Perseverance to your financial diet.