We Will Feed You To The Crocodiles

“We will feed you to the crocodiles” was the warning I received from a Senator.  At firs,t I thought this was an absurdity or joke that the Islanders of Palau played on the new guy in town.

Nope, I checked. It was true. If you really pissed-off the locals, they had their own way of letting you know it was time to leave the country.  First, they would ransack your home.  Second, they would torch your car.  If you still didn’t get the message then they would feed you to the crocodiles.

I was the new President of the National Development Bank and the warning came from one of the Senators that sat on the Board of Directors.  I had come in eager to clean up a very corrupt bank that would have been declared insolvent by every U.S. standard.  To me, it would be easy to turn the Bank around.  It just needed to stop making bogus loans to politicians and start collecting on those outstanding.

The warning was clear: “Don’t rock the boat- we like things the way they are.”

I now had a big dilemma: Do as I was told and enjoy a couple of nonproductive years sitting on a tropical island, or be true to myself and try to fix the bank.  Decisions like these usually come down to one’s morals, principles, character and etc.  So I looked the Senator straight in the eyes and said “You hired me to do a job, and that is to fix your bank.  When I am gone, you can run it back into the ground.”

I must say that it felt pretty good to stand up to a powerful Senator and take the moral high ground.  It didn’t feel so good when a few days later a friend came running by my apartment yelling that my car was on fire.  My first thought as I ran to my car was, “They skipped step one.  They were supposed to ransack my place.”

When I got to the parking lot, I was slightly relieved to see it wasn’t my car on fire, but a nearly identical one.

Nevertheless, the next day the Senator stopped by the bank and commented, “I heard a car was on fire at your place.” 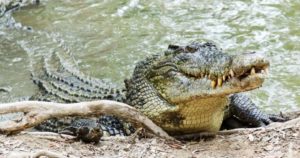 I responded, “Yes, but it wasn’t my car.  In fact, I drive a bank-owned car and my apartment is provided by the Bank. So, I am not concerned about something happening to them.”  I thought I was making a good point until I realized that I just provided the perfect reasoning to skip steps one and two.  Now, they might just go straight to feeding me to the crocodiles.

I quickly followed up by saying, “I am going to be fair and honest with everyone.  I am going to do my best to fix the Bank and when my contract is up, you do not have to renew it.  At that point, you can run it back into the ground, but till then I am going to work hard to make you proud of your National Bank.”

The Senator paused, staring me in the eyes. Realizing I was serious, that I had the moral high ground, and was truly doing what was best for the people/country, he just turned and walked away. Nothing else was said. The next couple of months were very tense but no crocodiles. The Bank rebounded and started doing very well.

The moral is: do the right thing and the crocodiles, real or imagined, won’t eat you.